So, Liadan and Kurithir in an ancient story, over a thousand years old. A bardic tale spoken over the years, parts are made into myths and may become legends. Can we today, connect with our feelings in a deeper way than just feeling love, as shown in the tale by our ancestors in the past.  Feelings of love feed our souls and drive many to do strange and miraculous things. On reflection, is their narrative still talking to us today?

In my first blog, I started with a quest to find out, through genealogical research, more about my past relatives. On doing this, a revelation led to a connection to ancestors from one family to another; my husbands and mine. His great-aunt (Elizabeth Rae) and my great-grandfather (Alexander Thomson), I found, from the 1861 census, to be lodging in the same household. Strangely, before attaining this information, I knew, within myself, that I would find this connection. How could this be? From this I began to think differently about the information I was receiving.

Photo showing 1861 census for Elizabeth Rae at 12 Glacks, at the age of six years

Photo showing 1861 Alexander Thomson at Farmhouse at Glacks (No. 13). 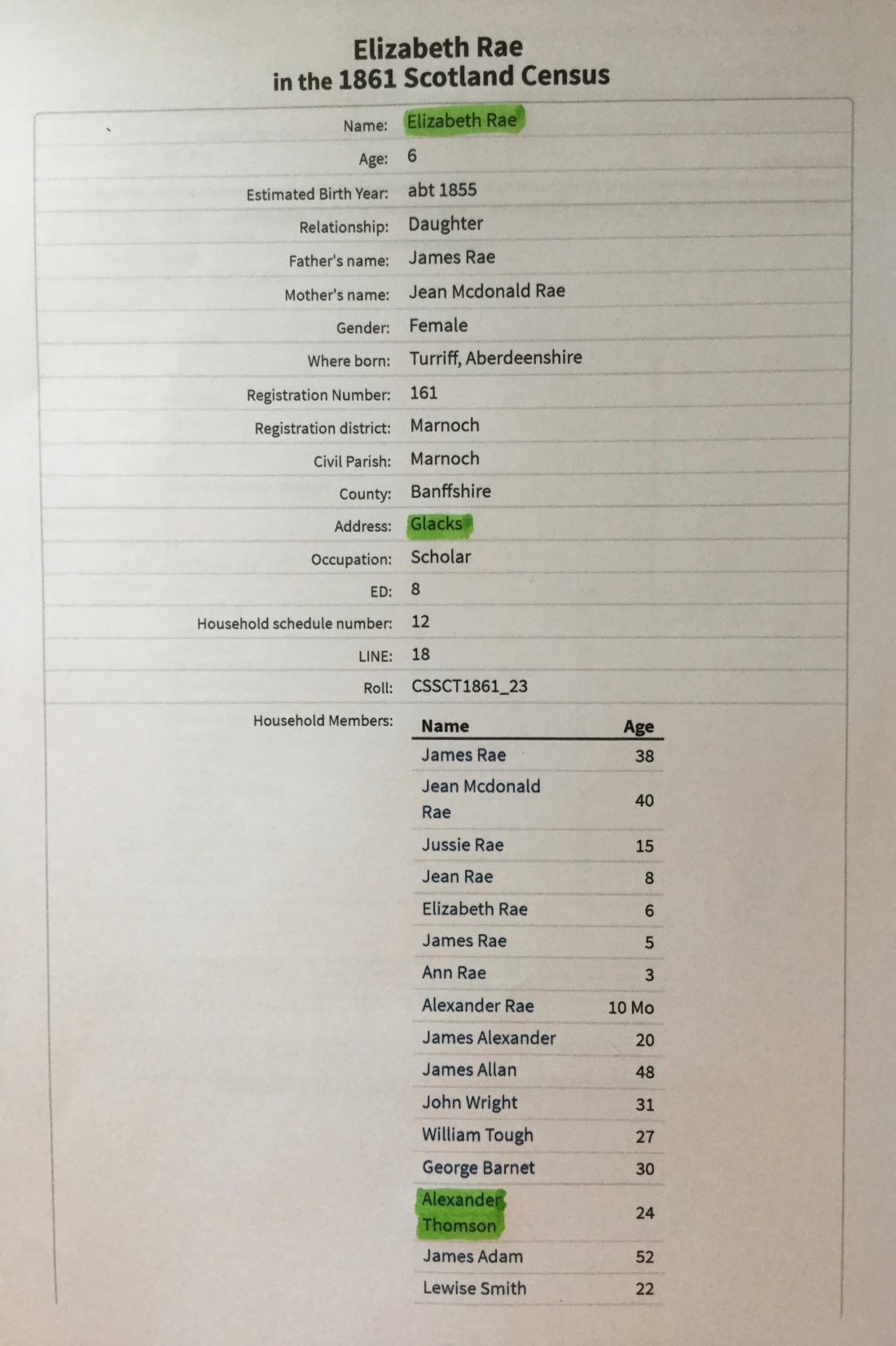 I started to question dreams I had. Visions so clear I could smell and sense the environment I was in. Details, I was able to check through the history annals, names of events from the past that I had never heard of before. Actually real. Had these dreams always come to me?

Simple answer…Yes, but I was unaware as I was not awake to them.

Like Liadan and Kurithir, their soul connection gave them strength, their knowledge of togetherness allowed them not to fear the unknown. The visions she gave to Kurithir gave him hope and comfort. Their bond was too strong for any realm.

Are these dreams unusual? Do we make them up?

Interesting archaeological finds have been discovered after a person has dreamt about the importance of a site that needed to be investigated.

A famous Anglo Saxon find discovered in 1939 came from such a vision. This vision was received by Mrs Edith Pretty, whose husband Colonel Frank Pretty had recently died.  Following her bereavement, she became involved in spiritualism, a religion that placed the belief in the idea that the spirits of the deceased could be contacted. Well fair to say, it may not have been her husband who made contact. However, the importance of a mound on her land, near the town of Woodbridge in Suffolk, England needed to be excavated. Basil Brown, an amateur archaeologist, on the request of Mrs Pretty, began work in May 1939 and within hours the colossal size of the find became apparent. An undisturbed Anglo-Saxon ship burial dating from the 6thand early 7thcentury was revealed. We know it today as Sutton Hoo.

Mrs Pretty had seen in her dreams what lay beneath the mound.

Another find dating back to 2012 was discovered in Leicester, England by the President of the Scottish branch of the Richard III society. Phillipa Langley attributes the famous discovery of Richard III, to a ‘feeling she had’ when she visited a carpark. This was where the King was later found. The remains could have been anywhere, but she knew the exact spot. From this amazing find we were able to exhume and confirm the identity of the last ruler of the Plantagenet dynasty who died at the battle of Bosworth in 1485. He was later reinterned at Leicester Cathedral on 26thMarch 2015.

Lastly, I recently lost a very dear friend. Shocked and saddened, my emotions were torn between knowing she was in a better place, as she had been suffering, and missing her terribly. Unable to sleep one night, in the early hours, I wanted to know if she was around, if she was happy and to know that she was well. Eventually I slept. Later that morning, I woke singing. This surprised me as I don’t often sing (not wanting to scare anyone) but I sang out loud. Unable at first to recall the song, I eventually found it. I had been singing the Mama Cass song, ‘Dream A Little Dream of Me,’ I knew at that moment what had happened and I felt great comfort on receiving this.

Just as Liadan had sent the music of the Lyre to Kurithir…a clear message.

These thoughts and findings have taken me further in my personal investigations.  I am completing a novel. It is a historically based romantic thriller including many of the themes and ‘coincidences’  mentioned above and within my previous blogs. There are more to share and these will feature in my books and future blogs. Please feel free to chat of similar experiences that you may have had. I’d love to hear about them

I live in the South of England. Having studied Archaeology and History I was pulled to Pre-Romano/British and Anglo-Saxon History. This love of history revolves around studying how our ancestors lived. How they interacted with each other and how they might guide us to this day. Using detailed investigation into my genealogical past, questions arose within me. Questions that led me to consider; who we are and where do we ‘spiritually’ come from, why are we pulled to the people we love and have we actually really been here before? I have just published an historically based suspense thriller, called The Windmill, centring around these deep spiritual thoughts. The second novel in the series is taking shape. Follow my blogs for updates. View all posts by klewisadair

One thought on “Power of coincidence?”